To help commemorate the First World War, the Imperial War Museum (IWM) has launched a digital memorial to record the life of every person who served in uniform or worked on the home front during World War One.

During the next five years the “Lives of the First World War” will become the permanent digital memorial to over 8 million men and women. This memorial is still a work in progress; not all of the records are yet online and more will be added over the coming months.

Over the coming months, millions of additional new records will be added to Lives of the First World War – from the Royal Flying Corp/Royal Air Force, the Royal Navy, the Canadian Expeditionary Force, the Australian and New Zealand Imperial Forces along with the records of almost 17,000 conscientious objectors. IWM is also seeking to include the Indian Army, Home Front workers and all others who made a contribution from across the British Empire.

The “Lives of the First World War” is a project that anyone can contribute to by adding to the records, perhaps by uploading a picture, sharing a family story or connecting to official records that will help build up a picture of what happened to someone who served during the war.

You might recall I wrote about my great uncle who served in the RAMC during the war. His name was Harry Jefferson and I found a record for that name. The record has no other details against it so I wasn’t sure if it was the right Harry Jefferson. We have a medal with his name on the edge which my grandfather (Harry’s brother) gave to me when I was a child. I had given the medal to my dad and he kept it with his own service medal.

A couple of weeks ago my Mum and I had a little trip down memory lane by way of looking through dad’s bedside box of trinkets and cufflinks etc. I found a medal but not the one I was expecting to find (which I hope will turn up eventually). Luckily, the medal I found was Harry’s British War Medal, 1914-18 which has his service number, rank and name engraved on the side.

I was therefore able to establish that the digital memorial record I had found was his. I will be taking part in the project by adding the few things I know about him to his individual memorial record.

My contributions to a conversation in Amfortas’ Tavern: 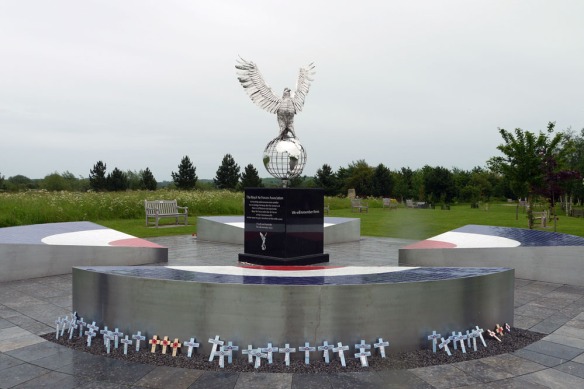 I visited the National Memorial Arboretum today and the Eagle in the attached photo was quite stunning against the skyline inviting closer inspection. When I got up close I found that it was the centrepiece of Royal Air force Association Memorial Garden.

It is a wonderful piece of artwork, a fitting memorial for those who served in The Royal Air Force. The crosses beneath have been placed there by friends, family and colleagues of those who served. Unfortunately the drizzly weather dulls the shine of the eagle against the sky… I thought you might enjoy it anyway.

Another of the memorials I visited was the one I mentioned to you recently; ‘Shot at Dawn’. I have posted about it giving more detail of what the memorial represents.

When I set off to visit The National Memorial Arboretum this morning I didn’t realise that it was Memorial Day in the United States. It was only later when I got back home and read Ginnie’s post at Vision & Verb that I realised I had picked a perfect day to visit the Arboretum. The Arboretum is a centre of remembrance to honor the fallen and recognises their service and sacrifice for their country.

The site covers over 150 acres and there are currently around 300 memorials. Far too much to see in one day. I picked one of the self guided First World War Centenary trails that had been launched earlier this year:
History enthusiasts will enjoy the more detailed Shot at Dawn Trail (2km), created to provide a deeper understanding of many of the trees and memorials connected to WW1 by fascinating stories and symbolism.

The ‘Shot at Dawn’ memorial is very moving and requires a few minutes silent contemplation. The memorial is situated on the eastern edge of the arboretum where dawn strikes first.

I was sitting on a bench when I took this this photograph. Right behind the bench were six trees placed where the firing squad would have been. The six trees facing the posts represent the firing squad, all aiming for the medallion around the statues neck and none of them knowing who had the fatal bullet. It must have been very traumatic for them too, having to shoot one of their own.

The full conversation can by viewed here.